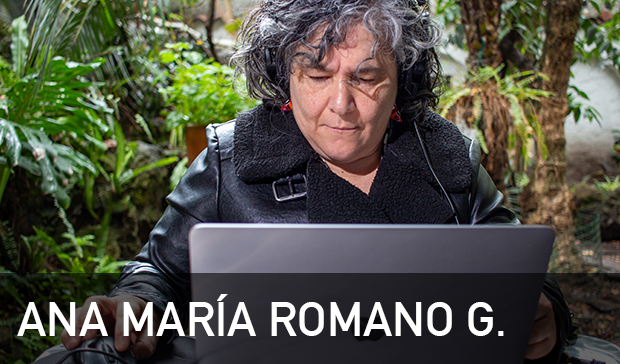 Ana María Romano G. is Colombian composer and interdisciplinary sound artist. Her research interests stem from the intersection of gender, sexualities, sound and technology, listening, soundscape, space, the body, noise, experimentation, and the political dimension of the creative. In all areas of her life, she considers collective and collaborative work fundamental.

Her works have been presented and published in Latin America, North America, Europe and Asia. She has received awards and distinctions inside and outside of Colombia. She has been an artist-in-residence at the Mexican Center for Music and Sound Arts (CMMAS). In 2019 she was nominated for the CLASSICAL NEXT AWARD INNOVATION (Holland) for the work, through Festival En Tiempo Real, on the visibility and amplification of the work of women artists. Her interest in research has led her to write texts for different media, as well as the production of several publications (CDs / Multimedia, magazines, websites). She has worked in-depth on the legacy of the composer Jacqueline Nova, a fundamental artist in electroacoustic music in Colombia. In 2017 she curated the exhibition “Jacqueline Nova. The wonderful world of machines". for the Museum of Modern Art of Medellín. In parallel, she has been conducting research on the woman protagonists of Latin American electronic music.

Her artistic and academic work develops regularly through events inside and outside of Colombia. Currently, she teaches at Universidad El Bosque. She coordinates Plataforma Feminista En Tiempo Real. She is co-founder and co-coordinator of the platform PAISAJISTAS SONORAS – AMÉRICA LATINA and is part of the Network of Latin American Composers -redcLa-.